Apologies for the radio silence. I run my own business from home; supposedly working full time (in addition to the previously mentioned film stuff) although it tends to get a bit tricky during school holidays so I have to play catch up once the boys are back at school. This term’s catch up has taken longer than usual due to a lot of meetings and disruption due to (of all things) hail.

However, we’ve had a good January. One where Archie’s progress has been noted. It started well with a visit to the dentist. Years ago, when we took Archie to our family dentist he refused to open his mouth, and if the dentist tried to open it would bite down on his finger. Our lovely dentist referred him to the special needs dentist instead. I think my first visit there is etched on my memory forever. We had to wait in a crowded waiting room with Archie becoming ever more feral. He refused to set foot in the surgery and so was taken to an office upstairs where he just screamed. The wide open mouth did at least mean his teeth were reasonably easy to check. Gradually, with repeat visits he became happy to open his mouth and they became slightly less traumatic.

We were visiting the dentist regularly (every 3 months) but seem to have fallen off the list. At any rate I realised with some horror that my sweetie obsessed eldest son hadn’t seen the dentist for about 18 months. I have no idea why, but while we’re waiting to get back on the list I asked our family dentist whether he would take a look. All seems well, and as can be seen from the photos below Archie particularly enjoyed the chair. 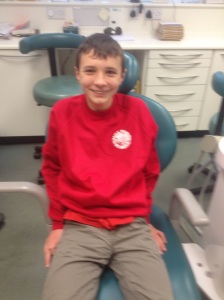 So that was success number 1.

Success number 2 was big. His annual review. As usual everyone said nice things about him (in between talking about the problems). But the big celebration is in his academic progress this year. In most areas he has progressed two p-scales. I must admit here that I tend to switch off when people start discussing p-scales (I do the same when teachers start talking about national curriculum levels for the younger two boys as well), but it was apparent from everyone’s reaction that such progression in one year is way above what might be expected. So wahay for the talker – and it demonstrates very clearly how important it is to work on giving these kids a voice.

First surf of 2013 today. There was a decent enough swell, although it wasn’t huge like the session before Christmas. I took along my little Flip video camera, but Harry paddled Archie out the back so on the whole they were teeny tiny dots in the distance. They came close enough to video once:

It wasn’t particularly cold today, but we do have a problem with Archie’s hands, in that they seem to shut down when surfing in the winter. The photo below shows two very white fingers (middle finger of his right hand, and index finger of his left hand). He is already wearing very thick gloves, I am going to have to investigate heat pads for him to have stuffed into his gloves while surfing. 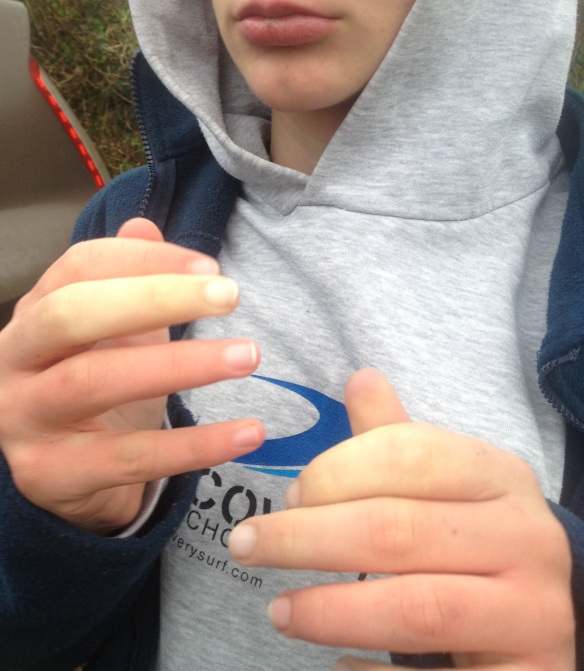 Post surf Archie warmed up in the car. We left the talker at home today. I recorded the little snippet of non-talker conversation during the post surf warm up. I think it shows how unclear his speech still is although with me very much leading this particular conversation we manage to understand each other without problem. We had a slight difficulty at the cafe after the surf. I told Archie he could have some more chips if he wanted but he asked for nannee. I interpreted this fairly confidently as ‘pasty’. NANNEE he said again with a frown. With no talker we were into playing guessing games. Cheeseburger? No nannee. I tried pasty again. Absolutely not. Eventually Archie pointed towards a freezer, ah ice cream? Big smile. Nannee was ice cream. It was fairly easy to get from ice cream to cornetto. Not a great choice for someone with freezing fingers, but hey who am I to argue? 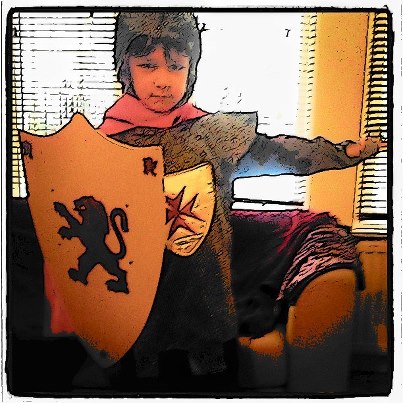 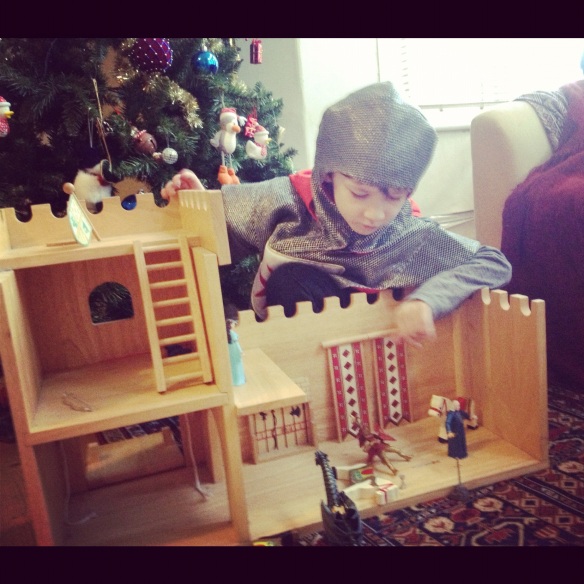 It is Louis’ birthday today so I thought he could provide the photographs today. Google came up trumps and I managed to find some Merlin figures. His grandparents asked me to buy him an Arthur outfit and again google was my friend. He’s been happily playing at knights all day, and we haven’t even had that many dead-Arthur impressions.

In talker-related news we’re off to a good start. Today I was discussing with my Mum and Richard when the 12th night is – for the all important tree-down operation. We couldn’t work out whether the first night is the 25th, or whether you start counting from Boxing day. Anyway, mid discussion Archie appeared Christmas gone Sunday. I told him the Christmas tree is going to come down tomorrow rather than Sunday, a day when he has respite  at Downham House. He listened then said Christmas tree gone Saturday after Downham. It is a small sentence but actually pretty amazing. He understood that the Christmas tree has to come down but more than that, told us he wants to be there to see it come down. Left without instruction from Archie we would probably have taken the tree down while he was at respite which may or may not have caused grief on arrival home. Only the parent of a severely autistic child can truly understand the relief at having probably avoided a meltdown…..